The Phaistos Disc, which was discovered in 1908 and is thought to date to around 1700 BC, is a circular piece of fired clay stamped with forty-five distinct symbols. This code is still unresolved. It inspires the participants of The Phaistos Project — Forty-five Symbols to translate current concerns — political, economic, ecological, cultural, or social challenges — into collections of forty-five unique symbols. Design methodologies are used as a mode of inquiry to develop ethnographic visual narratives that are subjective, stimulating, and capture visual traces of the anthropocene.

In this time of global transformations our design practices are shifting. While we are transferring skills to automated intelligent agents, we are defining our voice in the socio-political discourse that responds to human actions of the past and present. To successfully navigate these new interconnected systems and position ourselves as critical practitioners, we have to explore new ways of understanding design as a mode of inquiry. In that sense, the reflection of our methodologies, our abilities to research, and an open discussion of how we generate, document, and circulate new knowledge are crucial at this very moment.

We believe that studying a time capsule from the past has the power to spark new ways of thinking. Of course, materials and devices have evolved. Today, clay is code, interfaces are fluid (and not discs) and the access to knowledge is ubiquitous through mobile devices. However: Who’s knowledge is it? Who really has access? What are the questions that emerging designers have for humankind today and which narratives are worth being preserved for future generations?

We ask participants to shift who they are responsible to: Don’t think about your portfolio. Don’t imagine a client or try to please your professor. What could you do for your city? Your community? Your neighbor or maybe a global culture? The Phaistos Project — Forty-five Symbols is calling for research-driven and self-directed observations, experiments and speculations that provide new perspectives on the way we live.

The Phaistos Disk. By The original uploader was Ellywa at Dutch Wikipedia (Transferred from nl.wikipedia to Commons.) [Public domain], via Wikimedia Commons 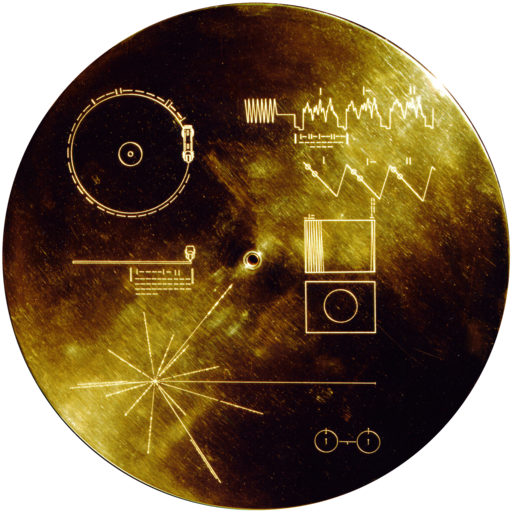 Two discs — both are devices of media technology; both have inscribed spiral information; and both capture our fascination beyond their materiality. One of them was found one hundred years ago underneath layers of soil below the surface of our planet. The other one was sent away from this earth fifty years ago. “It is currently traveling into interstellar space, the region between stars where the galactic plasma is present, and is the farthest human made object from Earth”. (NASA, 2013)

The Phaistos Disc was found by the Italian archaeologist Luigi Pernier in the Minoan palace-site of Phaistos. Even though its purpose and authenticity are still discussed it is considered to potentially be an early, if not the earliest, document of movable type printing. The clay-impressed notation is assumed to be a textual representation and comprises 45 unique and recurrent symbols. As Herbert Brekle points out in the article “The typographic principle” in the Gutenberg-Jahrbuch:

Early 2018, linguist and archaeologist Gareth Owens announced that he and his research group have deciphered “more than 50% of the Phaistos Disc”. The article on the website Archaeologist & Art continues: “in collaboration with Oxford phonetics professor John Coleman, he has progressed in the “reading” of 99% of the disk.” (Athens and Macedonian News Agency, 2018). They believe this textual representation is a religious text, a prayer to a goddess.

Still, there are many unresolved questions about the disc and it remains a mysterious artifact of archaeology and writing systems. What we know for sure is that the clay-impressed notation has 241 tokens, comprising 45 distinct signs.

The Golden Records are phonograph records made of vinyl. They store analog signals of coded images and sounds to portray the diversity of life on Earth. They are intended for any intelligent extraterrestrial life form, or for future humans, who may find them. They have been included aboard the Voyager spacecraft launched in 1977.

Their physical distance is increasing by the second, yet they share — on purpose or randomly — information about how we, as humans, observe and document our everyday. While the writing system of the Phaistos Disc utilizes icons of mundane everyday-life-objects, the Golden Records characterize humanity, for example, with images showing the “acts of licking, drinking, and eating”.

As scientists, we could apply forensic analysis and use carbon dating techniques to break the silence of the Phaistos Disc. Equally, we could use modern specialized instruments and software to track the Golden Records. However, we are also allowed to simply look at them through the lens of our personal history and cultural context.

In that sense, The Phaistos Project is applying Experimental Archeology as a mode of inquiry. We question material, form, content, meaning, use, benefit — nothing is off limits.

As Beatriz Colomina and Mark Wigley point out in their seminal book “Are we human?” artifacts change as soon as they enter the world:

“Artifacts are therefor never simply the representatives of human intentions and abilities. They are also openings, possibilities of something new in the human, even a new human. There is always a gap between intentions and what is produced. The artifact offers something unexpected, some additional quality or resistance. This excess opens up new ways of thinking, new modes of design.” (Colomina & Wigley, 2016)

Which ways of thinking could a clay disc open for young designers who grew up in the digital age and perceive the world through screens (which are squares)? One interesting fact is that the number of tokens on the disc — 241 — is very close to how we communicate today: tweets and short messages have almost the same number of characters.

The outcome of this collaboration was exhibited 2014 in Cologne at Kunst-Station Sankt Peter — a unique space that combines faith and liturgy with contemporary music and visual art. The gigantic spiral of symbols visually united the concerns and questions of design students of diverse cultural backgrounds.

Since 2015, the initiative invites for project submissions once a year. An international Jury selects winning projects that are published in a series of magazines. So far, we received 212 submissions from students coming from more than 43 different countries. This website only shows a curated selection. The participants observe, experiment, and speculate to capture a meaningful fraction of their everyday. The future might read their visual narratives as a writing system. It might not be understood as a tool of communication but as a commentary of this very moment and its local and global challenges.