The jury for The Phaistos Project — Forty-five Symbols was overwhelmed with the quality and scope of projects for the open call 18/19. Submissions came in from all over the globe, including Taiwan, Switzerland, Lebanon, Germany and the United States. Using sophisticated and ingenious methods, each participant translated their point of view into a narrative composed of 45 black-and-white visuals. This year’s winners took us on geo-journeys near and far — from the streets of Lebanon to 45 international airports, spanning the intimate worlds of our smartphones and keyboards all the way to the scrap particles and satellites orbiting the earth. The selection process of the jury was driven by the following criteria: Ability to translate topics into visuals; Overall level of exploration of the symbolic elements to deliver a message or tell a story; Systematic approach; and Uniqueness of the visual language

Jury Statement
Visual communication originated with the footprints and traces that our ancestors learned to read to better understand geological events and natural processes. Interestingly, we find two types of footprints: static impressions left behind on a surface, and the hand traces of movements that record processes as images. The former are the roots of cuneiform stamps or printing letters, while the latter evolved into different types of notations, such as drawing and handwriting.

Both principles of recording–the typed footprint and the moving traces of handwriting—have led Andrea Sara Gallo to her project, “Shaping Language.” The Swiss graphic designer uses digital methods to record and interpret the motion traces when one writes on a touch-screen keyboard. The traditional typing and hammering of the fingers is transformed into a continuous, vectorial movement, resulting in a flowing choreography with its linear notation. Letter sequences of words become line figures with their own aesthetics and surprising visual quality—a new form of digital handwriting, an enchanting stenography of dancing fingers.

In Gallo’s system, a specific picture is formed with each new word. It is not limited to 45 characters—however, the number 45 is brightly incorporated throughout her project. “Shaping Language” is a sublime example of the exploration of printed language and the search for wondrous new forms of writing; in the process, Gallo celebrates the beauty of the human body and its motion.

Jury Statement
Commercial air service was launched across the globe in the 1950s. Today, almost 70 years after that inaugural jet flight, the sky rarely can be seen without planes or their traces. In narratives, the image of planes taking us to unknown places represents freedom. However, the devastating impact of commercial aviation on earth and humankind is more of a threat than ever. Air pollution, climate change, and large graveyards of mechanical bodies in the desert are all too well known. There is less awareness around the noise pollution that impacts those living close to airports.

In the 16th & 17th centuries, the ability to extend our human senses—through the use of specialized instruments—was a privilege to naturalists who travelled the world to collect new knowledge. Today, we have access to more information than we could comprehend—or even look at-—in a lifetime. In their investigation of the impact of noise pollution generated by air traffic, Fitze and Staehelin expanded their human abilities to look at the world through the use of high-tech optics of satellites, exploring open source data to find answers to their research inquiry. To document and interpret their findings, the Swiss students applied various means of communication design, ranging from digital tools to visual archiving, to emphasize their point: Noise pollution is one of many threats caused by commercial air travel that we—as a society—need to respond to immediately.

Jury Statement
Scroll through your social media feed on any given day and you may frequently see videos of rivers, beaches and oceans filled with plastic waste. These are alarming reminders of our consumerism. Ever since plastic entered our daily lives in the 1950s, we have effectively managed to pollute our planet at a frightening speed. However, it is not only our planet that we fill up with this nearly indestructible garbage. Since the late 1950s, we’ve started to mess up an even bigger area–outer space. The motto “out of sight, out of mind” applies even more so to this space garbage. Alisa Strub, an aspiring graphic designer from Switzerland, visualized the problem of disposed satellites in her set of symbols entitled “Space Junk.”

The shapes of the icons reminded the Jury of a hybrid between bugs and shooters that appear in 1980s video games. The visual appearance of each symbol is not arbitrary. Strub developed them by analyzing the data of satellites launched between 1961- 2003. Each symbol represents one year, and visualizes the data surrounding the size and total number of satellites launched that year. Although these satellites are now inactive, they are still orbiting our planet. The famous lyric by John Lennon and Yoko Ono “above us only sky” needs an update.

Jury Statement
The mobile phone is now only 36 years old, yet it has changed our communications drastically. Today we no longer write, we type. We do not call, we WhatsApp. We look at our screens more than 100 times every day, and live more than 4 hours in the digital world. The smartphone is our new home, our own world where we store memories, inform ourselves, work or just have fun. We scroll through the news, click on the links and slide with ease within digital worlds. Simple hand movements become gestures with big impact—and, therefore, assume a large part of our current communication.

10th grade students Vivien Jirschik and Nico Liebig explore smartphones and their uses. Through a closer look at the gestures of locking and unlocking, they have visualized 45 variants of blocking patterns of an Android phone. With their simple, clear symbols, the German team reveal the often invisible and seemingly insignificant sliding movements of a finger on the screen, which are ultimately complex key movements of our communication today. With this magnificent work, they have not only unlocked smartphones, but have also opened the door to a new category in 45 Symbols for pre-college students. Congratulations!

Jury Statement
The spoken Lebanese language contains many idioms mixed with jargon that often result in surreal, sometimes shocking literal translations. For example, one might say “She’s sitting on my heart” in reference to someone who is unbearable or difficult to deal with; the concept of insulting or “trashing” a person can be illustrated by a figure throwing something into a garbage can. “3al Lebnene” is a collection of 45 illustrations, each unravelling a Lebanese local idiom in an amusing and original setting. Ghida Nadar exhibits these sayings in a skillful and entertaining manner, while successfully highlighting the absurd.

After collecting a range of popular sayings, the graphic designer took a clever approach to interpreting them. Using an original illustrative style, she created a character that could be used repeatedly to act out each idiom, thus transforming complex metaphors into an entertaining visual language that recounts eccentric situations.

Jury Statement
According to legend, the Italian King Umberto I requested a special dish for his wife, Margherita, and thus the first pizza was born in Naples in 1899. Today Katjetan Som expands the culinary panorama with many “new flavors.” But not only the association to pizza is visible in this project—the “Circular Font System” also reminds us of the starting point and origin of this call. With the spiral arrangement of the characters, the formal similarity to the Phaistos Disc is obvious. Som translates many aspects of the ancient disc to his innovative Phaistos Pizzas!

Unifying information design with typography, Som explores new ways of reading. But the project goes far beyond the creation of a set of symbols. By modifying the letter forms of the Latin alphabet, he develops a modular abstract language system. This systematic method makes it possible to create a circular visual representation of any word. Each word is depicted as a circular unit with defined information “slices.” The linearity, typical in traditional reading, is replaced by the circular—similar to the way we read a clock.

From a design perspective, Som has created a cohesive, precise system, integrating programming and augmented reality perfectly into a graphic visualization. The jury was particularly impressed by the clarity and abstraction in the communication design student’s visual scheme. The individual symbols are not just derivations from the Latin alphabet. We must understand the distinction in size between consonants and vowels, for example, in order to read them. “Circular Font System” is outstanding for its analytic visual concept, the clear exploration of the symbolic elements, and its innovative, transdisciplinary approach. 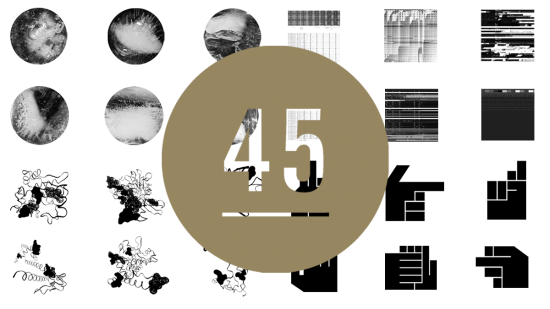 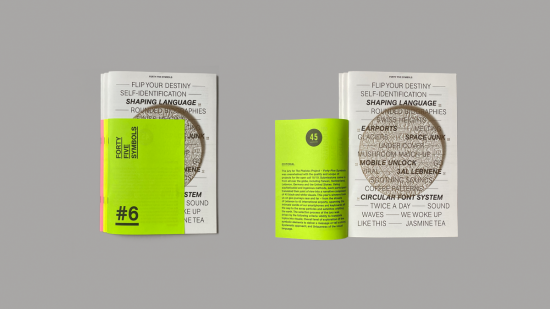 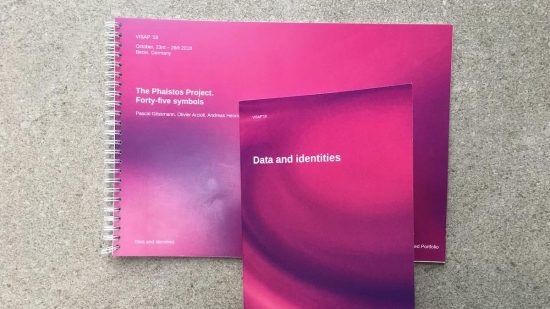